I know George is working on updating the Star Wars films for 3D release in theatres, but I think the films need an update before they come out on 2D Blu-Ray Disc. Here are my changes for the first disc release:

Opening Scene
In 1977 the opening shot of Star Wars was shocking. Nothing like it had ever been done in sci-fi cinema history. Unfortunately it shows it's age a little. George did a great update to that shot for an IMAX film about special effects. I'm going to go ahead and use that shot to open the new cut. The first thing we see needs to show us how huge and powerful the Empire really is.

Introduce Luke Properly
Let's cut from that space battle to Luke watching it in his binoculars on the surface of Tatooine. Then show him talking to his friend Biggs, who is about to leave him behind and join the rebels. (C'mon George, you shot this stuff, and it creates character and setting so well!)

Troopers Pursue Droids
Storm Troopers on big lizards isn't really working. The special edition ones look SO fakey, and the ones in the original film are such a minor point we could just work around it. Perhaps replace them with modified AT-STs or speeder bikes. This would also re-enforece the Empire's dependance of technology as a theme.

Mos Eisley
In the special edition you show what feels like several minutes of plotless crowd scenes around Mos Eisley. We're in an alien city; we get it already! I'm cutting this down to two establishing shots. No jawa falling off of an alien giraffe, no robot picking up a stick and hitting another robot with it, etc.

Han Solo's Introduction
Let's just correct the line about parsecs already! You corrected the "I want those tapes" line (like they'd be using tapes in that world!), why not update your other most remembered gaffe?

Also, I'll take this opportunity to second the already cliche requests to leave the Greedo scene as it was in '77. In my cut Han shoots first, and he seems like a dangerous bad-ass because of it.

We're also gonna lose Han talking to Jabba the Hutt. The conversation exactly matches the one Han just had with Greedo, and this CG Jabba isn't working. It's sloppy film-making, and we're going to cut it for time and clarity.I'm willing to put a new scene in here where we write slightly different lines for Han to respond to, and put someone other than Jabba into the scene. Perhaps we encounter yet another bounty hunter for another short exchange of pleasantries.

Luke Practicing with his Light Saber
The rotoscoping on the saber is really bad here. Go back to the master negatives and have someone re-do the glowing blade using modern techniques. While you're at it, you can replace the floating practice thingie with a more clever and dynamic machine. These are the places to let your team play with updating the film - not major scenes that were already working!

Interrogation of Princess Leia
The floating ball with a needle is kinda scary, but it's clear it's on a stick, and the noise that accompanies it is goofy. Replace it with a new all CG floating medical droid. Show multiple 'tools' on board this menacing machine, and have it rotate a collection of implements, ending with a needle. Now we've got tension!

The Destruction of Alderan
Show several establishing shots of the cities and people of this once beautiful planet. Show us, for a few heartbreaking seconds, what we are losing when the Death Star is tested on this planet. This will help us cut down on the 12 seconds of helmeted guys pushing buttons and moving levers you had in there before.

Escape from the Death Star
Obi Wan climbing on that tower to shut down power to the tractor beam is kind of cool, but the mechanism of the tower isn't very clear. I'm adding a layer of new CG to extend and adjust the scene and show that Obi Wan has climbed up to this remote power coupler by some unknown method. The audience will ponder if he used some as yet unseen Jedi powers to climb the device. The tower itself will look more like those pulsing energy things from Episode 1.

When Obi Wan confronts Darth Vader we have several problems to cover. Firstly, the rotoscoping on the sabers is, yet again, lousy. We're going back to the source master film stock and redoing the glow effects. Also, the battle isn't very exciting. Neither actor seems to be able to actually fight very well. I suggest we get stunt doubles and expand this battle to seem more impressive. The fight should not be as dramatic as those seen in the prequels, but closer to what we see in episodes V and VI. Darth should even be seen causing objects to fall or float towards Obi Wan during the expanded fight.

The Trench Run
When the rebel pilots are being briefed we see a 2D vector graphic info-graphic of the trench run. In '77 this was stunning stuff, but it needs an update. I'm replacing the flat screen with a 3D projection like we see in other films. It floats in the air, and parts of it are over the front row of pilots. It is still done in spare white wireframe style, but updated.

Pilot HUD computers in the TIE fighters and the X-Wings look a little dated. They both could use some updating with inserted graphics. Otherwise this sequence is looking good.

Summary
My total budget for the proposed changes would be less than 3 million. In one case need a short VO session with Harrison Ford, and possibly new VO from James Earl Jones. We'll need a voice-alike for Obi Wan Kenobi, and two stunt performers to do a new saber battle. The saber battle will be done in mo-cap CG, and the characters will not be seen in CU during these new fight sequences. We'll also have to do some rotoscoping from old live-action shots of Obi-Wan and Darth.

The rest of my changes are low cost CG inserts, and I'm sure we can line up first rate talent since Star Wars is such a special title. It deserves a higher quality of meddling than it has received up until now.
Posted by Will Cetus at 2:24 PM 1 comment:

You’ll wake up soon to find, red states have changed their minds
But if they don’t change soon then we will all be sorry

I was working as a governor in the great white north
That much is true
I’d banned some books, I’d shot some moose, I’d had lots of kids
I did what made-up bull-dogs do
These five weeks in the fall have really opened my eyes
(what’s the VP do?)
Just give me one more chance and let me change the landscape
I’d like to paint the white house, too

My Wife as the Mona Lisa 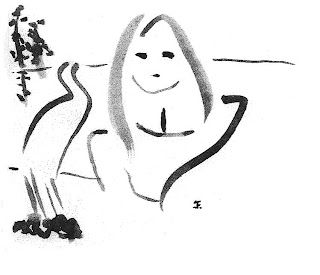 I chose Sumi as my medium because although I have no talent for it – Japan is the first matriarchal society I can remember.

So torn twixt two purpose is the modern woman. Power and success in career juxtaposes supple succor and amongst those two proud shoulders are her yielding breasts – lending nourishment to either goal and so floats between them. The mighty river flows ever forward. It is power and unrelenting and the tall bamboo bend ing yet nurturing and stalwart and perfect in the Universe.

“How would you have done it?” Good question, eh? I'm sure you seen, heard, read, experienced something before and thought about how it would have come out if you'd been the one pulling the strings. Here's your chance. Derivative works. Forgeries. Pastiches or parodies. All are welcome.